Skip to main content
You appear to be using IE 6 (released Aug. 2001). To take advantage of all of the features on our site, please consider upgrading to a current version of IE.

Why upgrade to LED?

Manning LED lighting fixtures are up to 90% more energy efficient than incandescent alternatives.

Manning LED lighting fixtures have warm, natural color, making them suitable for all types of environments.

LED options are already available for many of our standard products in the wide array of categories you’ve come to expect from Manning. And many more LED lighting fixtures are on the way!

Or if you like the look of your current lighting, you can still take advantage of the many advantages of Manning’s LED lighting fixtures. An LED upgrade replaces the “guts” of your existing fixtures to improve the appearance, efficiency, and performance.

Utility rebates may be available for upgrading to LED lighting fixtures

Your local electric utility might be able to help cover the cost of upgrading to LED in the form of rebate offers.

Incentive programs and policies vary across the country, so contact your local Manning rep to learn about what rebates might be available in your area, or visit www.dsireusa.org for more information.

How does LED lighting work?

We’ll spare you the technical details here: Think of an LED as a tiny light bulb that lives on a circuit board. A power supply called an LED driver is necessary to convert standard line voltage to the low voltage that the circuit board requires.

What are the benefits of LED vs. conventional lighting?

For example, an incandescent fixture that uses 1500 watts can be replaced with an equivalent LED model that uses 150 watts. Plus, the LED components are rated to last 50,000+ hours before replacement is required. That’s decades for most churches!

Need some help with LED terminology?

LED terminology can be confusing. Here are some terms used on this website and their basic definitions:

Lumen: A unit measurement of the rate at which an LED or other source produces light.

L70: The L70 value is the period of operating hours until the LED's lumen output has depreciated to 70% of its initial output. Since LEDs don't "burn out," this value is generally accepted as the product's useful life.

For a more in depth look at LED terminology see: https://www.lrc.rpi.edu/programs/NLPIP/glossary.asp

Are there any downsides to LED technology?

What kind of LEDs does Manning Lighting offer?

We offer different LED types depending on the fixture shape, size, and lighting requirements. Sconces use LED boards, while pendants use both boards and LED downlight or uplight modules. We use only high quality LED components from proven manufacturers including Cree, Osram, and Lutron.

Whichever system is used, we recommend you proceed with caution. Most dimmers have a maximum LED load that can be applied, often as little as 10% of its nominally rated value. Since it’s impossible to test every LED option with every dimmer type, it is advisable to test a particular fixture with a specific dimmer beforehand to ensure that the combination will work as expected. Look for controls that specificially mention compatibility with LED equipment.

What else should I know?

LEDs don’t burn out like regular sources. Instead, they gradually grow dimmer over time. LED longevity is typically rated as the time it takes until their light output is reduced to 70% (or L70). Our components are rated to have an L70 of 50,000 hours or more.

LED equipment costs more than incandescent, fluorescent or other sources. However, when you factor in savings in energy, maintenance, initial cost of lamps, and dimming controls, LEDs will always have a relatively short payback time to recoup the initial cost.

Can I upgrade my older Manning fixtures to LED?

Yes. Our fixtures have always been designed with a modular approach, so replacing incandescent, fluorescent, or other sources with LED can be very cost-effective. Even products not originally made by Manning Lighting can usually be upgraded to LED.

What's the difference between a retrofit LED light engine from Manning Lighting and buying screw-in LED light bulbs from a local hardware store? 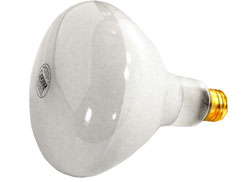 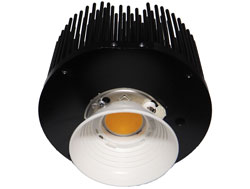